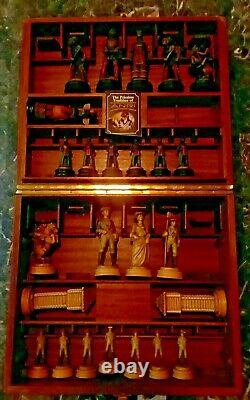 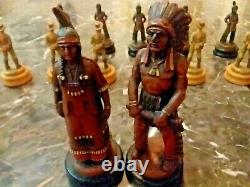 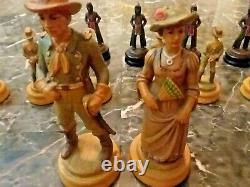 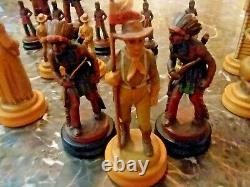 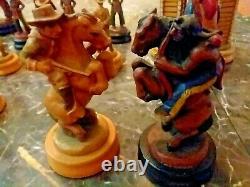 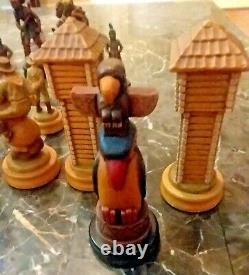 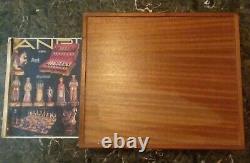 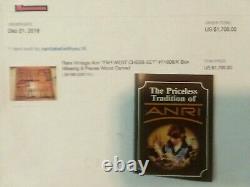 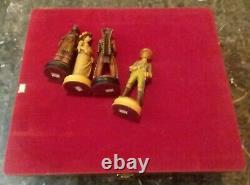 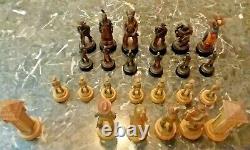 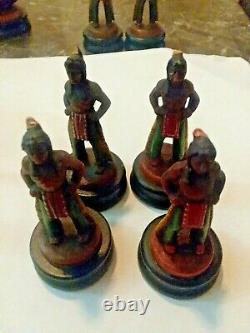 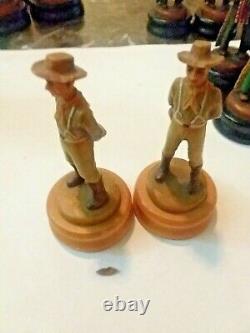 These were issued in 1961 and retired in 1984. The finely hand carved Anri Far West Chess pieces are crafted from alpine maple and are hand-painted and gilded, the bases are lightly weighted and felted. The Anri markings are on both King and Queens along with the storage box.

Anri chessmen are 100% made in Italy for those who can appreciate the true value of these magnificent artistic chessmen. This set is displayed in chess collector books. It appears in the book "Chessmen for Collectors" by Victor Keats.

King 5 1/4" with 1 13/16" base. Pawn 3" with 1 3/8" base. I assume he was able to find and add 1 so it now has 7 missing. The original Anri two-tray fitted wooden box has some discoloration and two lower corners have separated slightly which could be repaired. 4 Native American pawns have shorter feathers that seam to have chipped off on the ends.

On the Cavalry side 2 pawns have damaged hats (I have one chipped off piece). This seam to be a common issue especially for it's age (last two photos). In 1912 Josef Anton Riffeser founded the ANRI Company, which he named using the first two letters of his first and last name. After World War I, where he was in a prisoner of war camp in Siberia, he formulated his plan for a woodcarving company. He created his own models which he distributed successfully, mainly in the Alpine region.

When Anton Adolf Riffeser took over in 1945, he transformed the ANRI company, adopting a more industrial model which allowed for better quality control and distribution to new markets. He was followed by Ernst Riffeser who was able to enlist the services of many well known artists including Juan Ferràndiz, Sarah Kay and others. The ANRI company today is run by Thomas Riffeser, and still remains in the same family.

The wood art tradition has a long history in Val Gardena, Italy. The tradition of woodcarving dates back to the XVII century, when farmers started producing wood toys and utensils during the long winter season. The peasants than used to sell the items at spring markets. Part of the autonomous region Alto Adige/Southern Tyrol in Italy, the Val Gardena is known for its ancient romantic language, its skiing facilities and its old tradition of woodcarving.

The ANRI companys chess sets from the 1950's through the 1980's were produced in this region and have gained collectors status, thanks to their unparalleled quality. I inherited a large chess set collection and most were used for display in glass curio cabinets or stored. All information given in the listing is described to the best of my ability either from paperwork my relative kept or research I have done. I in no way want to misrepresent anything I list so should you feel something in the listing is inaccurate or misleading I kindly ask you to contact me so I can verify and/or make appropriate edits as I make no claims to be an expert. The item "RARE VINTAGE ANRI FAR WEST CHESS SET #71806 IN ANRI WOOD BOX MISSING 7 PIECES" is in sale since Tuesday, November 17, 2020.

This item is in the category "Toys & Hobbies\Games\Chess\Vintage Chess". The seller is "shannogeorg-75" and is located in Sugar Land, Texas.